China is the motherland of tea cultivation. Long before the Chritian era (Chr.) was grown tea in China, according to which there was already tax had to be paid. Nobility and scholars already drunk tea during the Tang Dynasty (618-907). A time where monks in Buddhist monasteries hour long meditation tea drunk in order not to fall asleep. In this period, the first publication of a book (author Lu Yu) on tea, Chajing, and tea was exported to Japan and Korea. 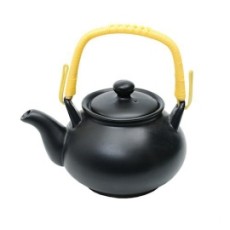 After this period, the Song dynasty, started the top layer of the population with tea-drinking. There were contests held for who cultivated the best kind of tea and the art of tea cooking was refined. In 1279, the Yuan dynasty, expanded drinking tea on the entire population. The tea Art School is founded in the Ming dynasty (1368-1644). The cultural revolution made an end to the Chinese tea houses. In recent years the tea houses came back on the street scene.

Tea is grown mainly in the South of China. The green tea comes from the eastern provinces, Zhejiang, Anhui and Fujian. The red tea from the Yunnan province, and Taiwan Oolong-tea from the Fujina, the yellow tea from Hunan and the black tea from Sichaun and Yunnan. China has six major different kinds of tea: green, red, yellow, white, and pressed half fermented tea.

There are three types of schools of the tea art:

In the Tang phase was pulverized tea used that along with water was boiled until the water took on the right color. Having regard to this tea a pinch of salt was added, this method is also called the School of the salted tea called Powder.

During the Song dynasty was the tea art refined. The tea powder was filled up with hot water and together with a bamboo broom to make it foamy. The art of the ' was that the foam continued to maintain as long as possible. This is called the School of the foaming called Jade.

In the Ming phase were whole tea leaves used and originated the ceremony with the name Gong Fu Cha or Kung Fu Cha, who in the 2000s still in southern China (and Taiwan) is maintained. This method is also known as the School of the scented leaves called. For this ceremony is Oolong tea used.(bron: Wikipedia)

Tea as a social gesture

As a sign of esteem were guests in China served tea. This gesture still exists in the 2000s. The younger generation offers the older generation tea to express their respect. In leading Han Chinese families shows the Mack to the social status of the drinker: the servant, hired servant and such drunk tea from a Tin Zoltan, so that one not a teacup needed. A smaller China may was for the family and guests. The family head and the honour guests drank their tea from tea cups with lids.