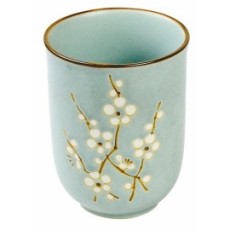 The Japanese tea ceremony is attached to strict rules and regulations concerns the actions and attitude of the participants and the place where the tea ceremony is held. Also receiving the tea by the donor is still from traditional acts. When receiving one, put one bends the bowl with tea on the left hand and running this with the right hand in three short movements a full 360 degrees in the round, clockwise.